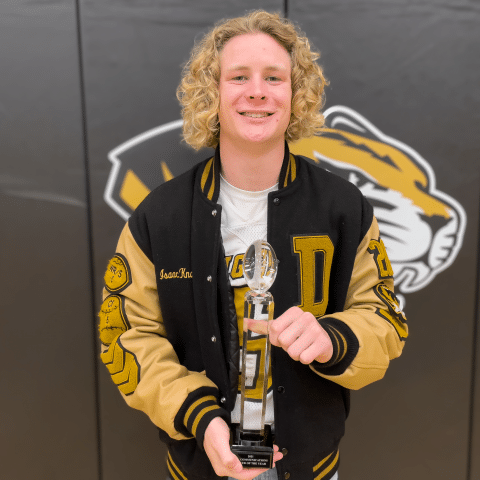 Each season, DTC Sports selects an outstanding player from the DTC service area for the DTC Communications Player of the Year. This year, the honor went to DeKalb County High School senior Isaac Knowles.

Knowles was chosen based on his outstanding performance throughout the 2021 regular season, including being named DTC Sports Player of the Game for his performance against the Cannon County in Week 6 as the Tigers defeated the Lions 49-7.

Knowles was a threat from multiple positions on the field and lit up the stat sheet throughout the season. Offensively, he primarily lined up as a receiver where he caught 59 passes for 898 yards and six touchdowns. He also carried the ball eighty-three times for 711 yards on the ground with twelve touchdowns. Additionally, Knowles started at quarterback for two games due to injury and accrued 155 passing yards and two passing touchdowns. Knowles was the primary return specialist for the Tigers, gaining 472 return yards and one return touchdown. In total, Knowles tallied 2,111 all-purpose yards (211.1 yards per game) and 19 touchdowns. Knowles was responsible for 124 of DeKalb’s County 287 total points on the season.

Knowles was equally impressive as a ball hawk on the defensive side for DeKalb County. He registered 76 total tackles, three tackles for a loss, four pass breakups, seven interceptions, three forced fumbles, one fumble recovery, and one defensive touchdown from his defensive back position. In a rare feat, Knowles scored a touchdown in five different ways during the season: passing, rushing, receiving, special teams, and defensive. Knowles’s efforts helped the Tigers earn a 6-4 overall record and a berth in the TSSAA playoffs.

In addition to Knowles’ award, DTC Communications also presented DeKalb County High School head football coach Steve Trapp and the DeKalb County High School Football Program a check for $500 for having this year’s DTC Communications Player of the Year. Justin Mauldin of DTC Sports made the presentations to Knowles and Coach Trapp during a pep rally at the school on November 5th, before their first-round playoff victory against East Hamilton. 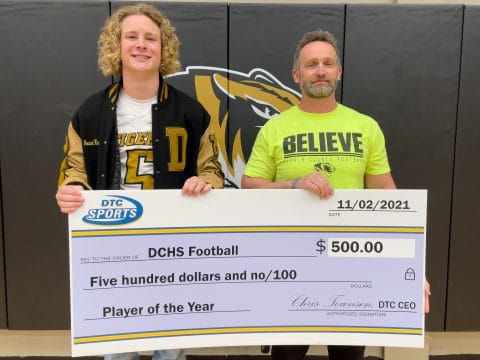 “DTC Communications is proud to be a community partner with the local schools in our service area, and we are equally proud to recognize the accomplishments of the outstanding student-athletes within the area,” said Chris Townson, CEO of DTC Communications. “I want to personally congratulate both Isaac Knowles and the DeKalb County High School football team for their remarkable accomplishments throughout the 2021 high school football season.”

DTC Communications is proud to continue its long-standing support of its communities and the athletic programs within these communities.

DTC Communications is a member owned telephone cooperative established in 1951. The cooperative supplies communication, entertainment and home security products and services to residential and business customers primarily throughout Middle Tennessee.