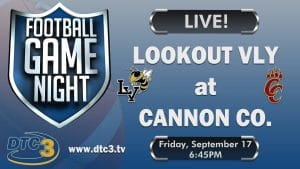 DTC Sports has finalized the schedule for their coverage of high school football for the 2021 season. An 11 game schedule of live coverage will air each game night, starting at 6:45 p.m. on DTC channel 3, online at www.dtc3.tv, and on Facebook Live on DTC Communications’ Facebook page. Tape-delayed telecasts will air solely on DTC channel 3 in the week following each game. Watch Football Game Night all season long on DTC3!

The Football Game Night schedule is as follows (schedule is subject to change):

Be sure to check out the 2021 Football preview for each school and don’t miss a minute of the exciting action on Football Game Night every week on DTC3!